For over than 80 years, building the future.

Menegotti Group are well known for quality in everything they do. It has been eight decades of history, turning challenges into solution for customers.

A brazilian company, that it’s in fourth generation of a consistent, successful and professionalized family management. With 100% brazilian capital, throughout its trajectory it expanded its structure and diversified its products focusing its businesses on two distinct branches: construction and agriculture.

Watch the Institutional video, get to know the Menegotti Group and the people who participate in this successfully trajectory.

In line with the precepts of strategic management and organizational culture, it has a corporate structure to support its 4 branches and 400 employees

Throughout its history, the Menegotti brand has gained an outstanding position for doing business in an ethical and serious manner.

With a culture of decentralized participatory management, wich is based on five major perspectives: Result, Process, Market, People and Socio-environmental, whose achievement of stablished goals is monitored monthly by all employees, the company manages to engage the team creating a positive climate that reverses into internationally known quality. 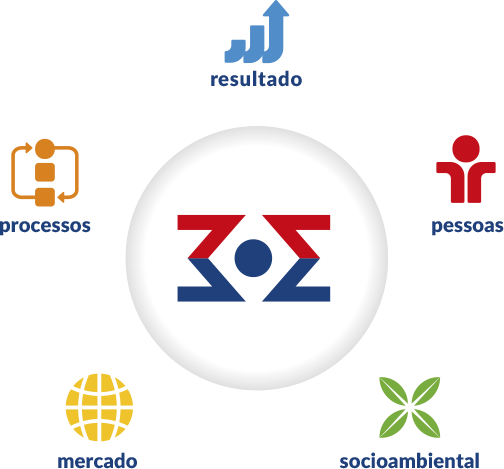 Be the leader in Latin America in supplying light machines and equipment for building.

Supply in a sustainable manner products and services for building with the commitment of increasing the productivity, safety and profitability of our customers.

Starting with production of axes and horseshoes for horses evolved into the first Menegotti concrete mixer.

A path to internationalization.

Consolidated presence in more than 40 countries. 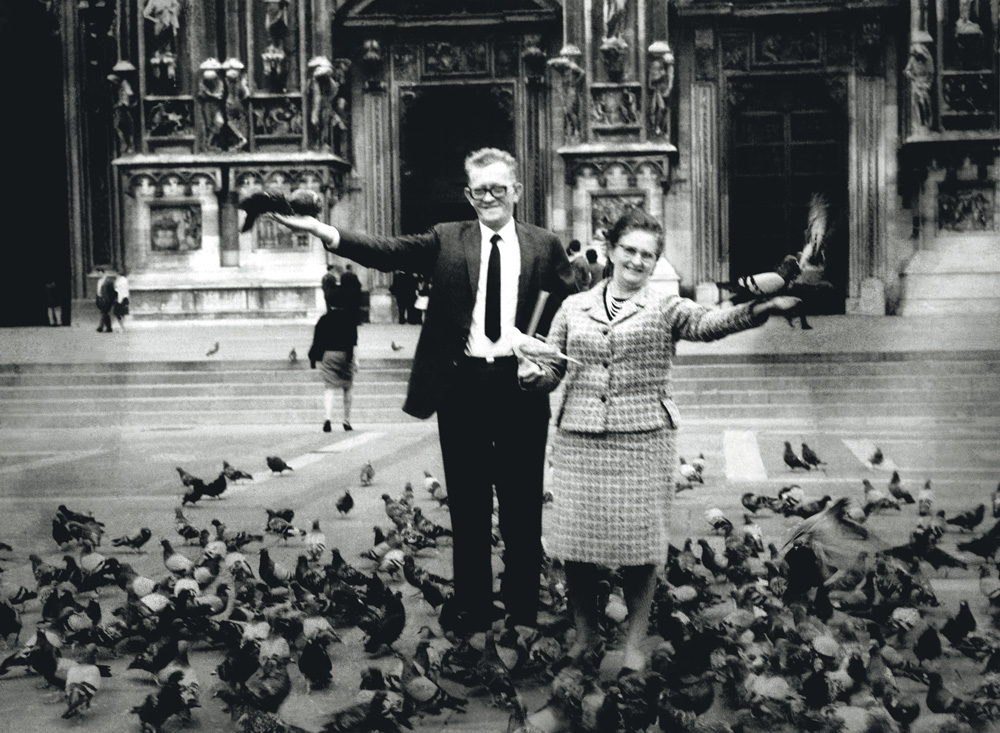 The couple composed of Maria Kanzler Menegotti and Erwino Menegotti dreamt of creating their own business. At a time when the activities were predominantly concerned with the working in the fields, with only four employees Menegotti produced axes, hoes, scythes and repaired carts. 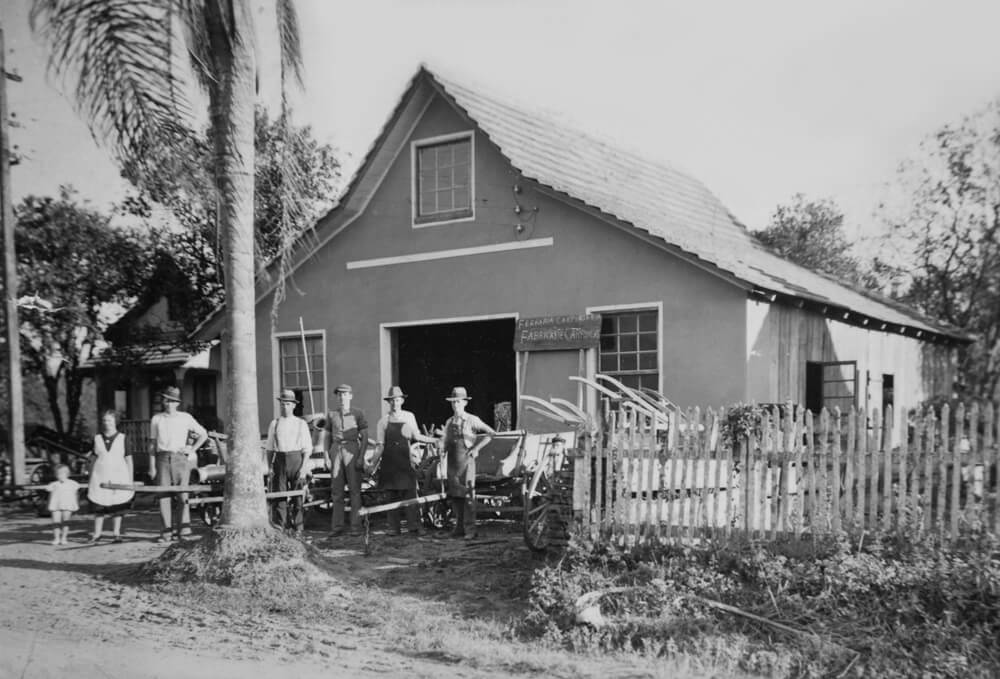 In only ten years, Erwino Menegotti ironworks had already tripled its facilities and diversified its production. Attentive to the needs of the city, Menegotti also came to produce agricultural implements, trimmers, and rice ryers and cooler, and was already recognized then for the quality of its products under the brand “Aço Prata”. 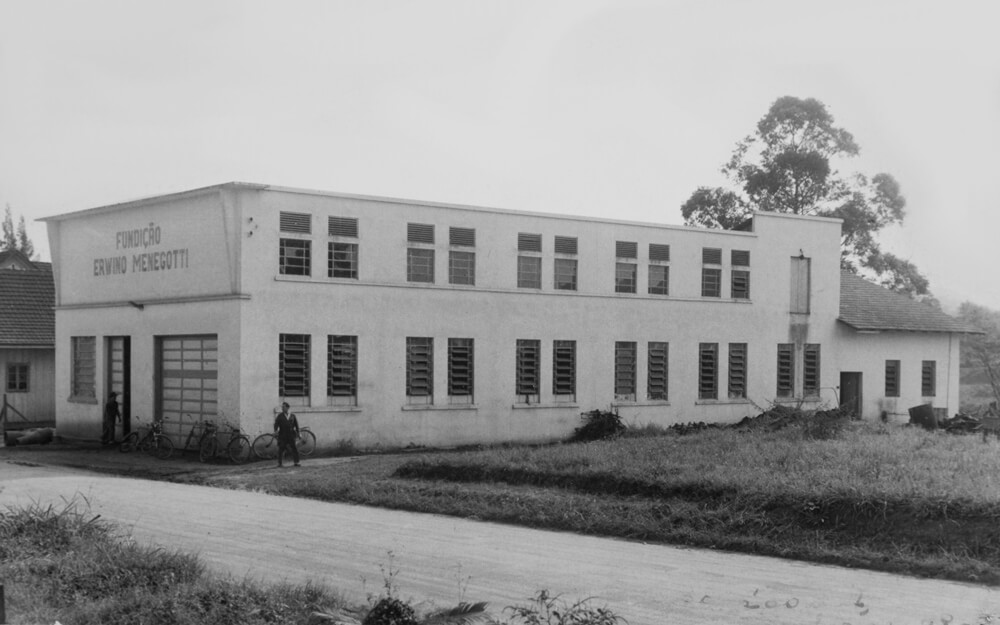 In 1963, its first smelting furnace went into operation, enabling the manufacture of other products such as hydraulic turbines and a press for manufacture of concrete tubes. 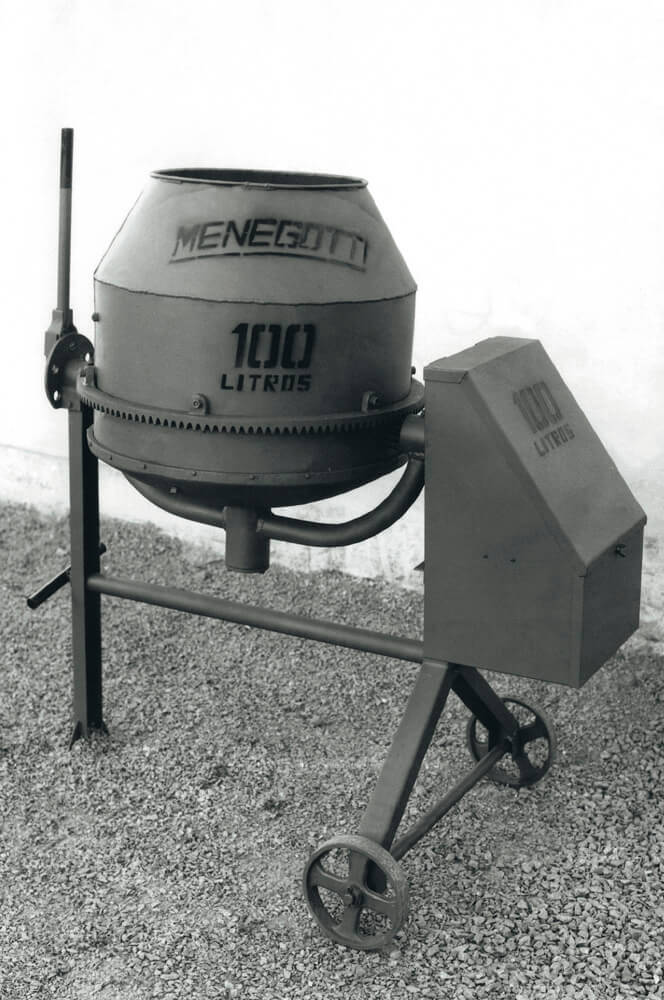 The mixer division had a great incentive from Menegotti with massive investments. The assembly line was highly qualified and equipped in 1967 to produce the first Menegotti mixer. This product put the company in the lead of this market in Brazil and in Latin America. 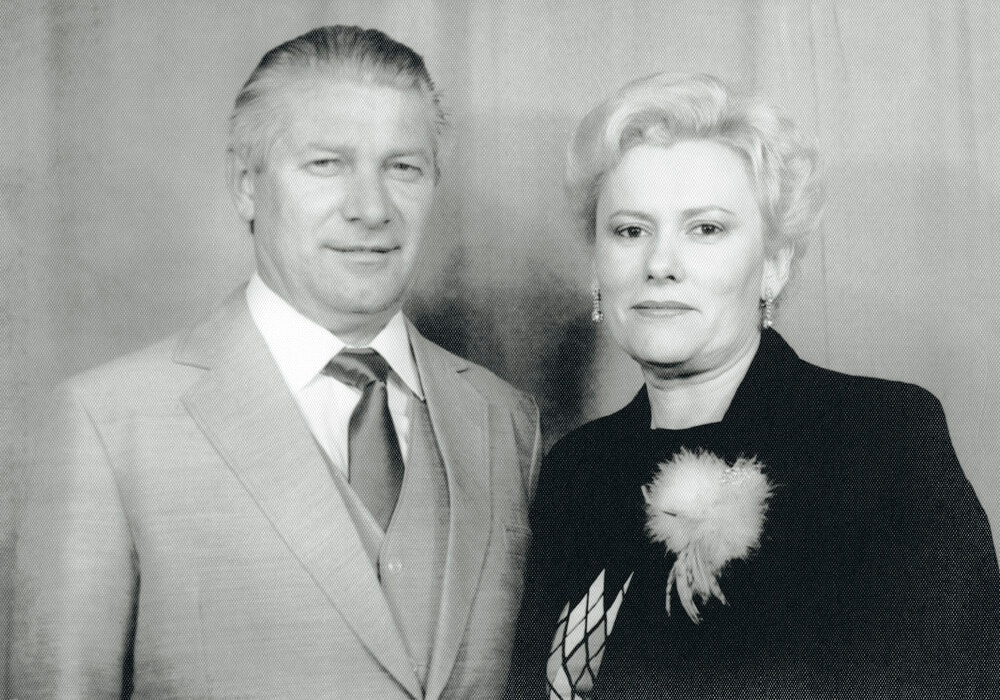 The ideal from the founding era was a reality in 1980, despite the great competition. With the passing of its founder, on December 27 of 1983 at seventy-three years of age, Sigolf Schünke and his wife Cacilda Menegotti Schünke took over the direction of the company. 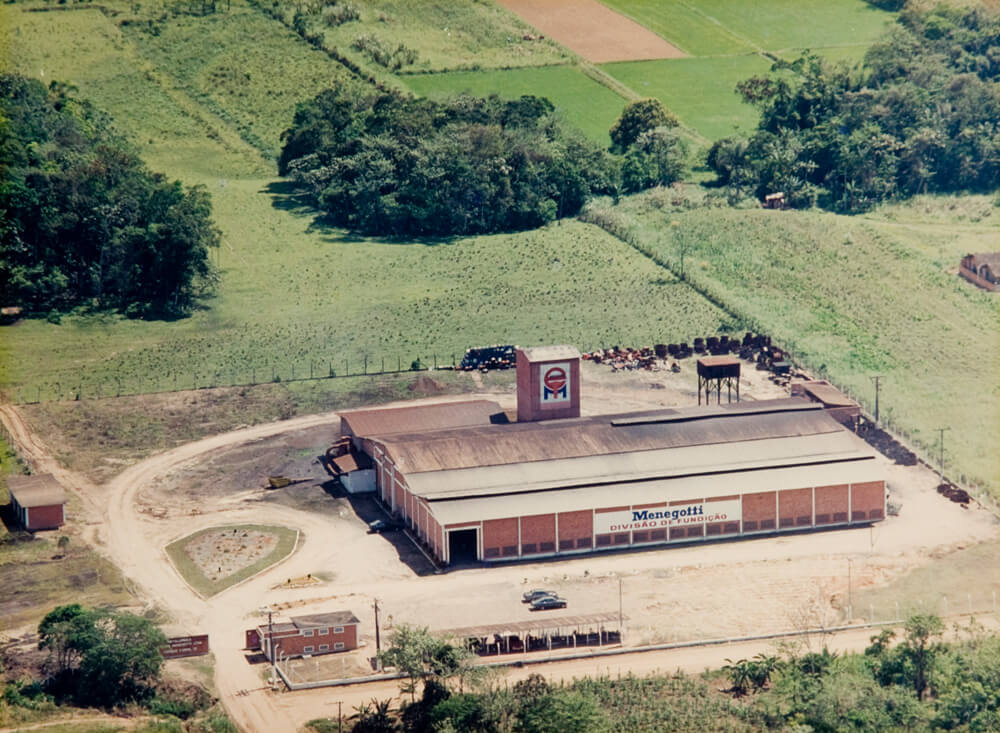 In 1988, in the City of Schroeder, in Santa Catarina, the activities of the Foundry division of Menegotti continued at a modern industrial park with leading-edge technology. Pieces of gray, nodular, and white cast iron were
already being produced to international standards and norms. 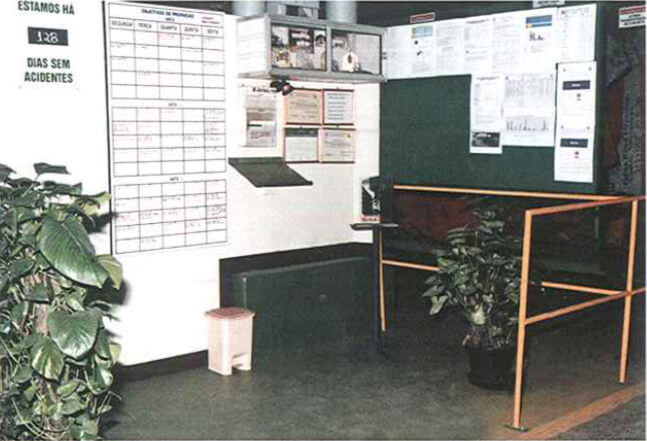 Menegotti begins a new era of strategic and professional vision. In 1933, the executive office, composed by the third generation, Mr. Eduardo Horn and Mrs. Mércia Menegotti Ferreira Horn, implanted the Quality Control Circle, as well as the Eagle Project composed by the 5’S and the Individual Suggestion Program. All of them were actions focused to the qualification and establishment of the excellent of our team. Yet in that year, the PPR, a Profit haring program for all of the employees. 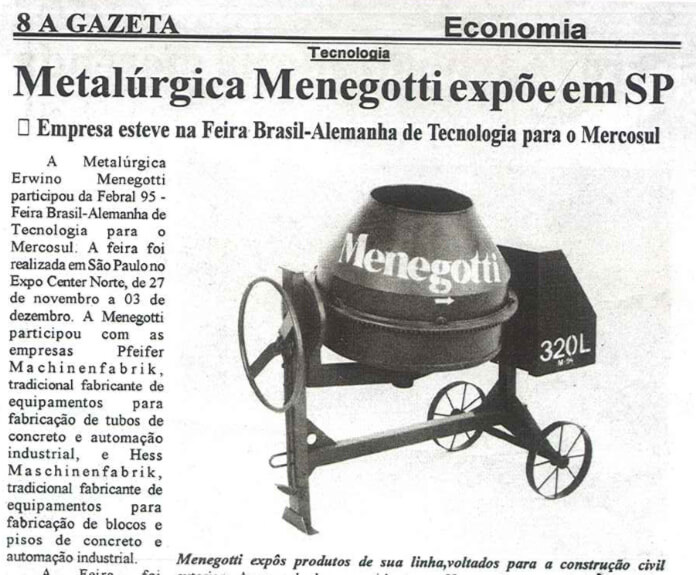 In the year that crowned our fifty-fifth anniversary, Menegotti confirmed its participation in the Fair FEBRAL, which was a fair for German technology products for Brazilian and South American countries, in São Paulo.

First leaders' structured meeting - a practice that happen every three months in the company to align strategic objectives, check results and action plans. 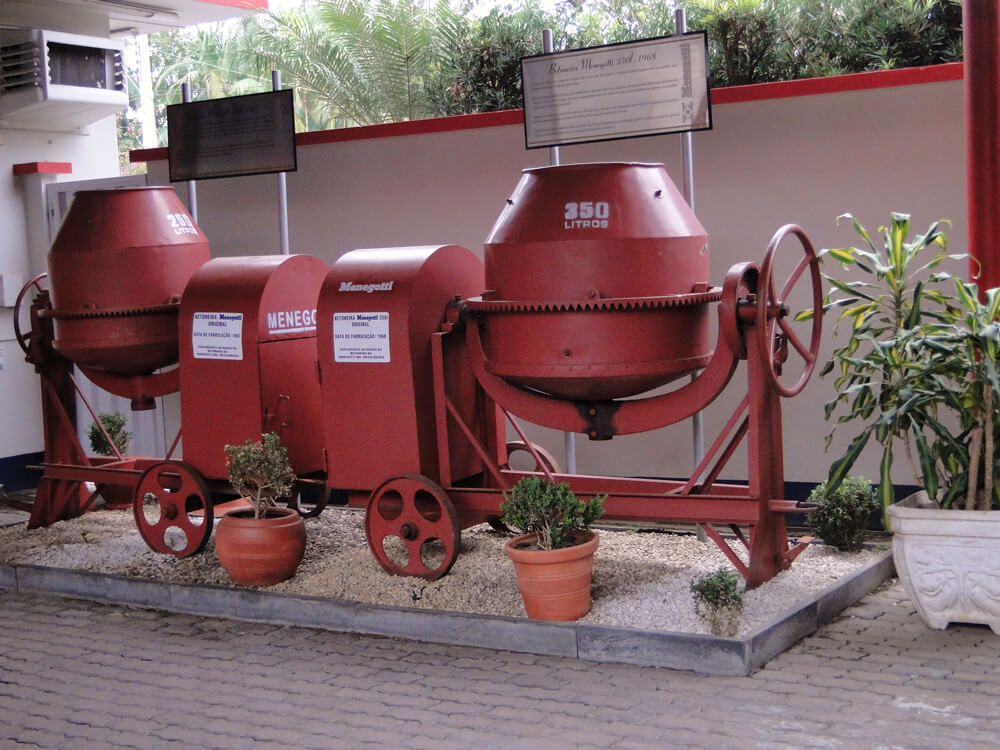 The company also turns its eyes to the past with the creation of the Concrete Mixer Museum.

2003 was a year market by the split of the Menegotti Group, where the company Menegotti Indústrias Metalúrgicas, incorporated the companies: Menegotti Construction Machinery and Menegotti Fundidos. Today, the Menegotti Group is made up of three independent business units: Menmaq: Menegotti Construction Machinery, MGT - Handling and MCC - Garden&Farm Menfund - Menegotti Foundry and Machining; and Menfer Unit, Mfer - steel processing. These units are supported by a solid corporate structure that includes: Finance, Human Resources and Information Technology. 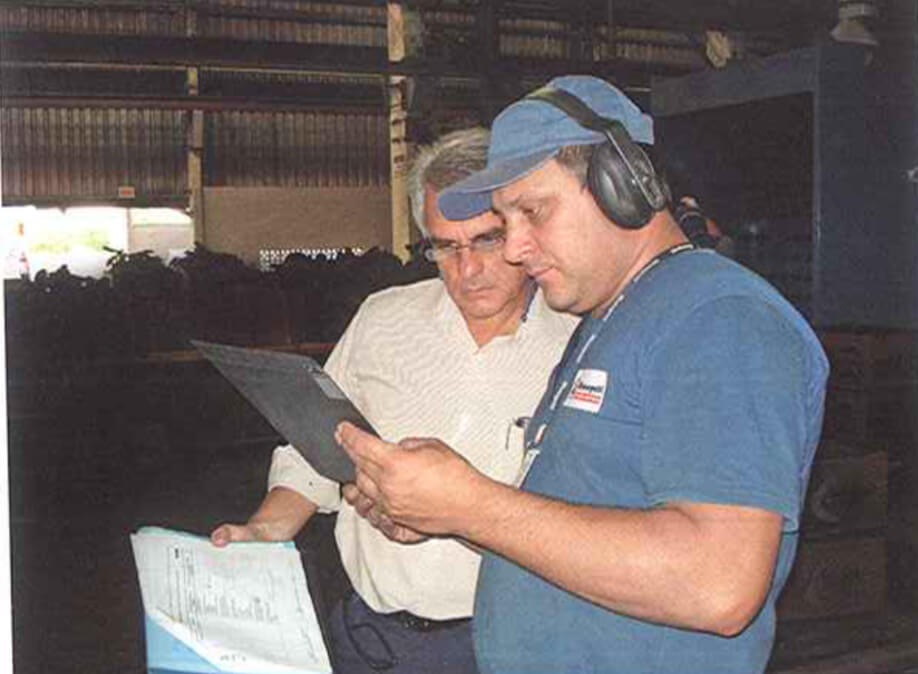 The Environmental Management Systems began to be implemented, earning three years after ISO 14001 certification, which has a series of standards that establish guidelines on the area of environmental management in companies. Also in 2006, the Menfund unit achieved the recommendation of ISO TS 16949: 2002 Certification and ISO 9001: 2000 recertification. 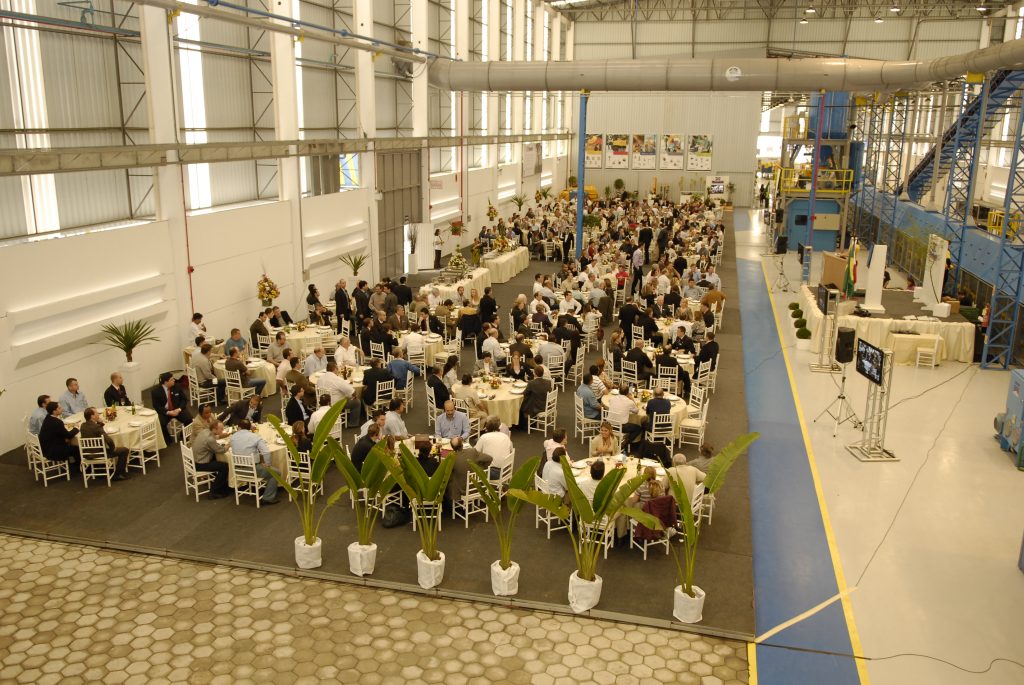 New warehouse and equipment acquisition, together in the Schroeder unit, in the current Factory II (Loramendi) started its operation, taking the company to another level of delivery of produced tons (from 12,000 tons/year to 25,000 tons/year). 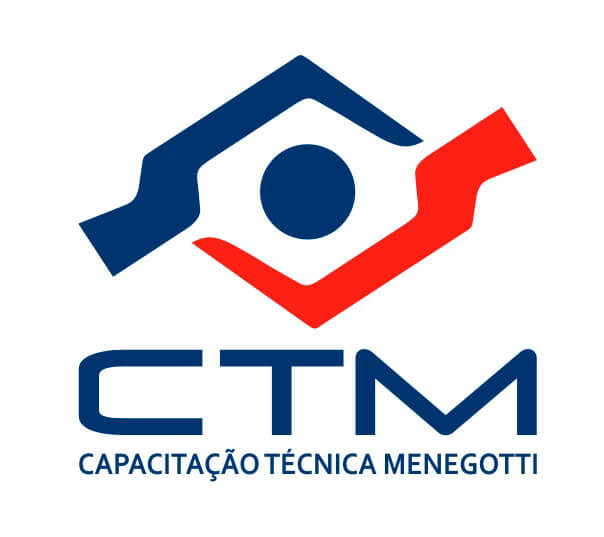 Inauguration of the CTM – Menegotti Training Center at the Jaraguá do Sul Unit, focused on teaching and training people in the use, prevention of equipment aimed at civil contraction, as well as getting closer to the market to follow trends and desires of those who understand the work . 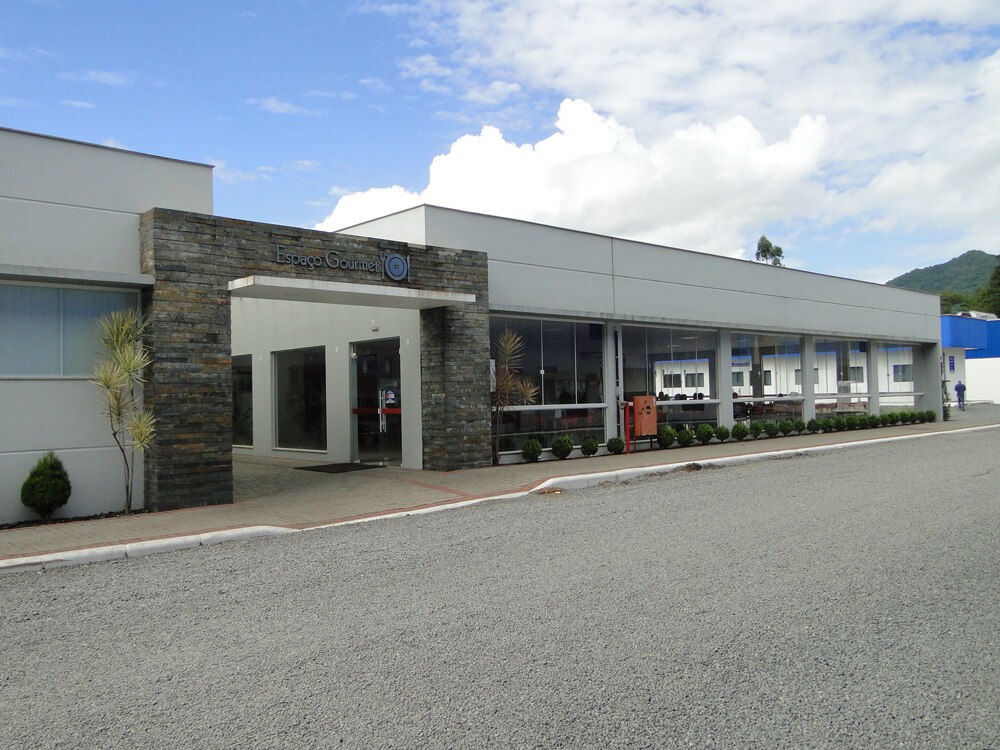 Inauguration of the new restaurant - at the Menfund Unit. That same year, there were several product launches in the company, which would be targeting a different audience from that of its companies: Lighting Towers, Dumpers, others. 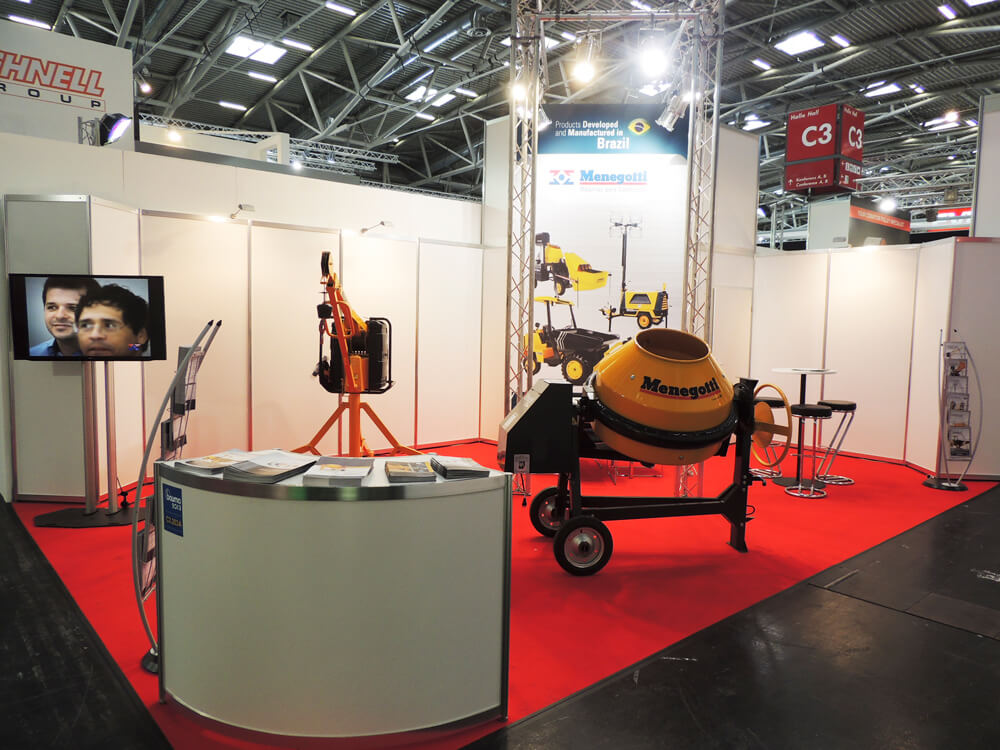 Participation of Menegotti Construction at the Bauma Fair 2013, in Munich, Germany. 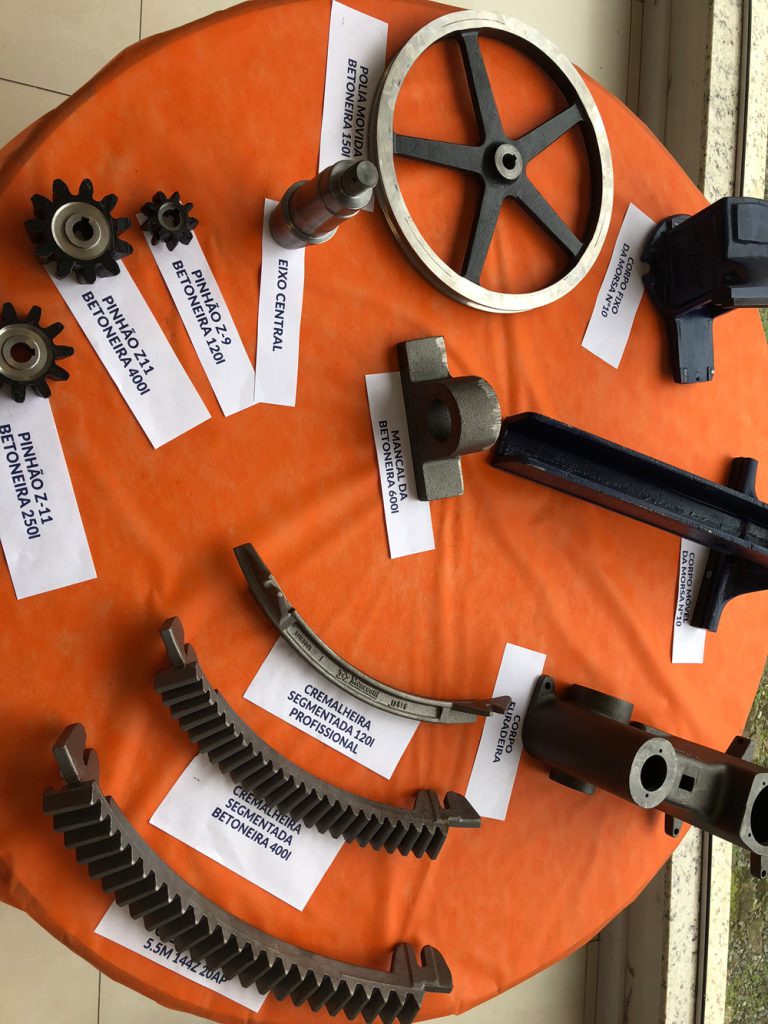 In 2014, the company opened Factory III in Schroeder, which would be used for machining process, and in that same year it acquired the Vick Molding Line, which would further increase the company's productivity in the issue of cast products. 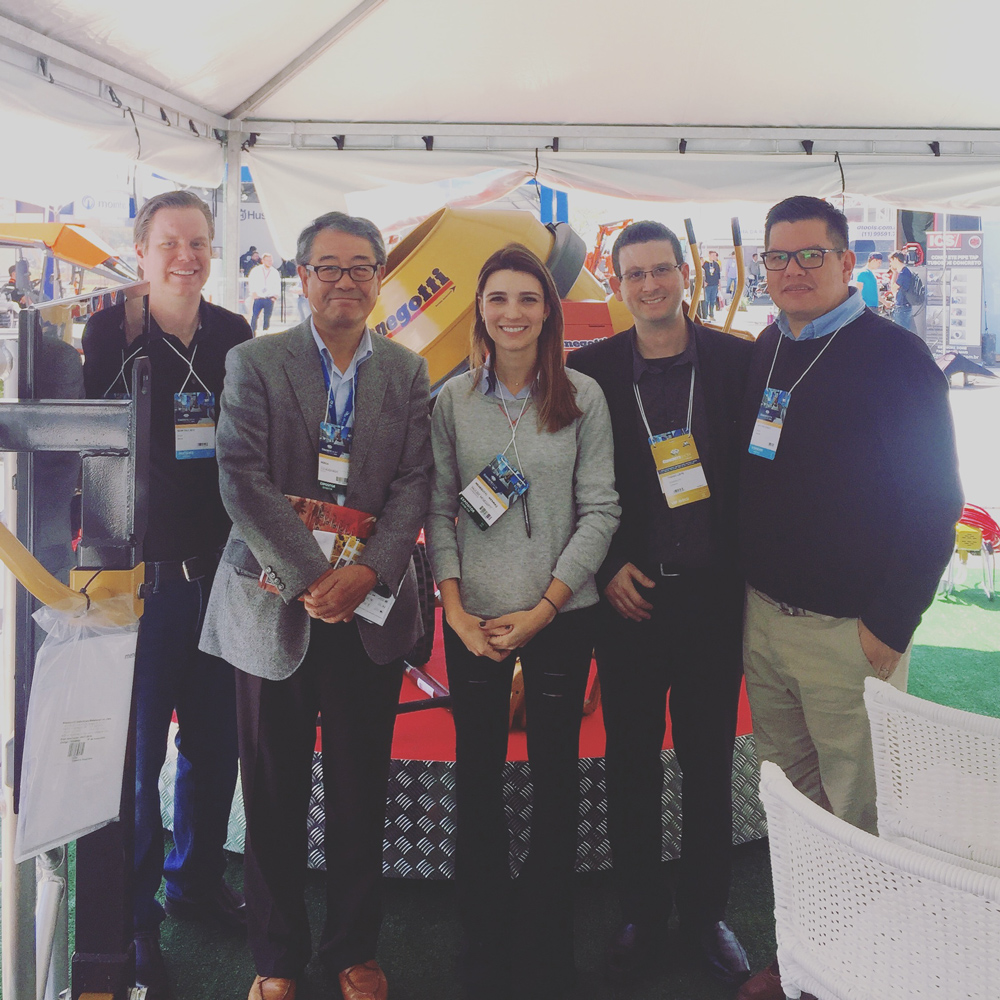 It was from that date that Pauline Menegotti Horn, representing the fourth generation of the Menegotti family, is invited by the Company's Board of Directors to assume the presidency of the Group and the management of Menegotti Construction - in Jaraguá do Sul, and Menegotti Steel - in Corupá. 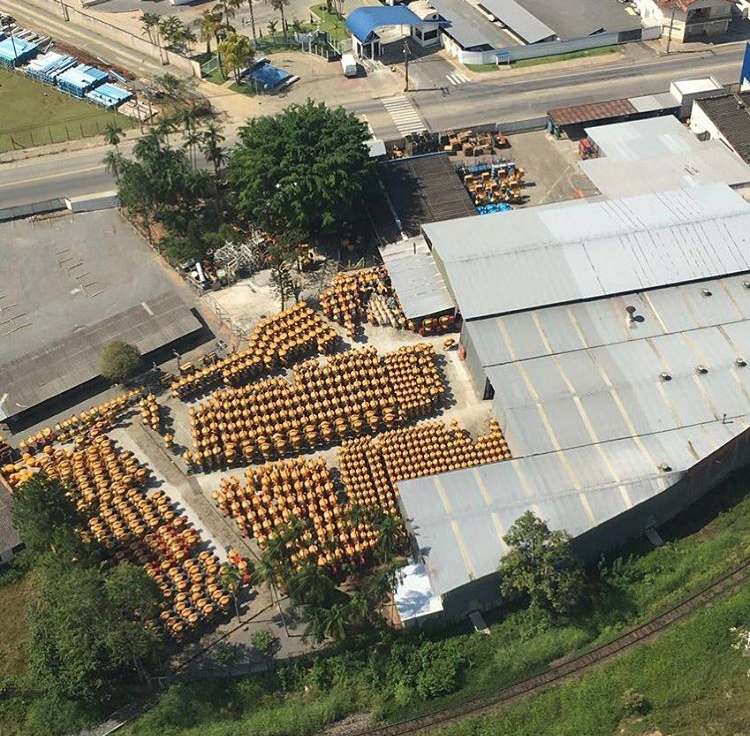 2017 was a year of great changes and adjustments. The company structure was reduced and changed, processes were revised and simplified. That year, the company had five units in operation, three of which were manufacturing and two for distribution and assembly, two of which (Schroeder – Mentec / and in Recife) were closed. The country's high indebtedness and the political crisis it faced and is currently facing, led the company to seek to rethink its strategy, in its markets of operation and focus on the development of products for the Foreign Market. " 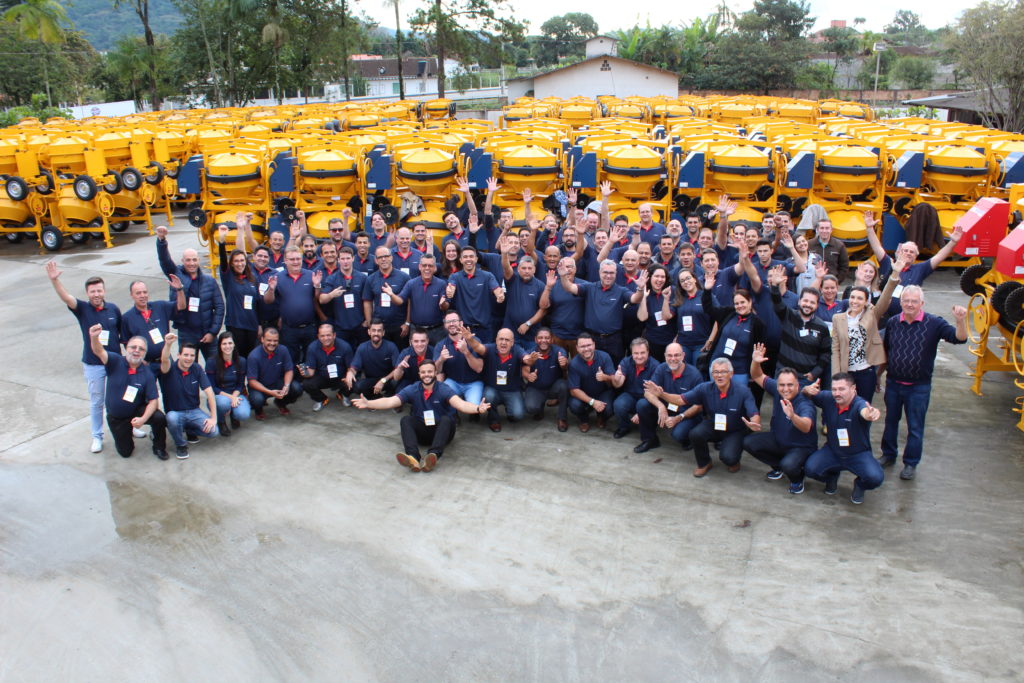 In 2018, the company starts the year with the a marketing campaign "Let's make History again" and through this message, the transparency adopted with the team and the recovery of hope for better days, the Menegotti group makes very important achievements.
The Foundry and Machining unit achieves IATF 16949: 2016 certification and in the second semester it reaches an indication of excellence in order delivery, with 99% being served within the time agreed with the customer.
Menegotti Construction opens its first International Unit. With plans for expansion and rapid recovery of profitability, the Unit in the United States in Atlanta, Menegotti North America, now leads the Menegotti group to be a Multinational company.
Still in that year, the company strategically reorganize its units, create new brands in order to strengthen other product lines and give greater understanding to its channels of action on its products. It was born: MGT – Handling and MCC – House and Garden, inside the Menmaq unit. 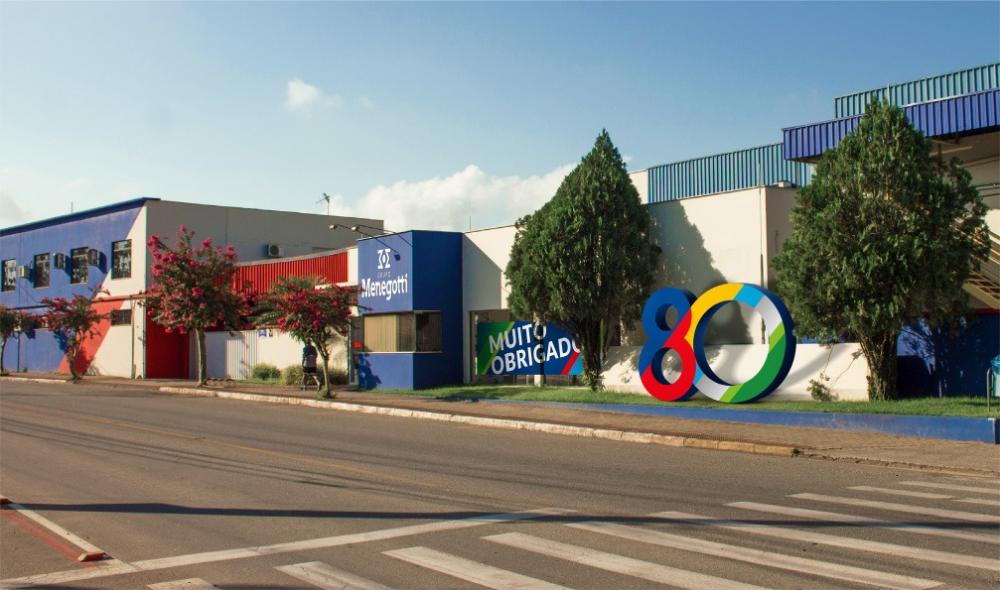 The Menegotti Group is celebrating its 80th anniversary as a leading light construction company in South America and as Foundry Sustainable.
Pauline, CEO says: “The innovative spirit of my great-grandfather, our founder Erwino Menegotti Senior – who 80 years ago worked to do our first product – is alive in the generations of our people who continue to deliver previously unthought-of solutions. Our longevity is a credit to our employees, business partners and customers whose dedication to the brand are absolutely key to our success.” 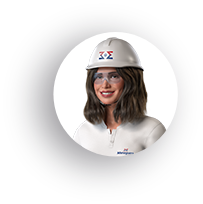